I’ve been dying (read that with infinite ‘g’s please) to visit Le Bilboquet ever since I first heard of it when I first moved to Dallas – nearly 1/2 years ago!

A) Can you believe it has been that long!?!?
B) Don’t worry – this totally chic French restaurant based on its New York City clone of the same name did not – by any means or measure – disappoint.

This past Sunday morning, my friend Sam and I popped into the restaurant for some pre-opera bites; we were going to the Dallas Opera‘s matinee performance of Salome afterwards, so we needed some fuel for the 100-minute-with-no-intermissions opera. Quickly: one thing you should know about my friend Sam is that she is my food soul mate. And I don’t say that lightly. Seriously, every time one of us is craving something (no matter how bizarre or random) and vocalizes it, the other immediately says “YES”. And an adventure to satisfy that culinary craving commences. Burgers at 10PM? Me too – let’s dash to Hopdoddy! Pad Thai at 11AM? We dash to CrushCraft. Our friendship is a judgement-free zone… particularly when it comes to food! So now back to Le Bilboquet. When we arrived on Sunday, I took one look at the menu and one item immediately caught my attention: the Shakshuka. You may remember my post with my own recipe for Tex Mex-ified Shakshuka – the dish rapidly became one of my favorites when I was in Israel this summer. After a second glance at the menu, I noticed the Brioche French Toast. Oh hot damn that sounds amazing… so what to choose?

Thankfully, Sam turned to me and announced that she couldn’t decide between getting something sweet and something salty. OMG problem solved! In the immortal words of my father, “why choose one when you can have both?”

So we got both (and split them). Yup, we’re geniuses.

But did we decide correctly? Le Bilboquet’s Brioche French Toast is like something out of a dream. French toast with plenty of berries and banana slices on top… topped with a heaping mound of whipped cream and a delicious drizzle of sweet syrup. One bite and I was on cloud nine.

Kindly, the restaurant split the order of Brioche French Toast between two plates for us… so estimate that the real deal will be about twice the size of the above. Now for my favorite: the Shakshuka. Le Bilboquet’s Shakshuka is definitely a traditional take on the dish – the biggest (and really only) change made is that Le Bilboquet’s Shakshuka is served with toasted French bread instead of toasted challah. The other aspects of the dish are all there though: it still has onions and peppers and tomatoes and ever-so-runny eggs… and it is still served in a skillet (makes the dish that much better in my opinion!).

Though the Brioche French Toast comes as a pretty large serving, the Shakshuka really is the perfect size for one person. Splitting the two dishes, neither Sam nor I walked out of Le Bilboquet feeling uncomfortably / just-leave-me-here-to-die-level full or hangry (my new favorite word).

Le Bilboquet is located right off of Knox Street in Uptown (right where it meets Highland Park). Reservations for the restaurant can be made through OpenTable (as well as pre-checking out Le Bilboquet’s menu!). Le Bilboquet is open Monday through Wednesday, for lunch and dinner, from 11:30AM until 10:00PM, Thursday and Friday, for lunch and dinner, from 11:30AM until 11:00PM. On weekends, the restaurant is open Saturday and Sunday for brunch, 10:30AM until 3:00PM, and for dinner, 5:00PM until 11:00PM (on Saturday) or 10:00PM (on Sunday). Le Bilboquet is great for large groups (I’m already thinking about having my 25th birthday dinner there!) and for slightly fancier occasions.

Have you ever been to Le Bilboquet? What did you order? 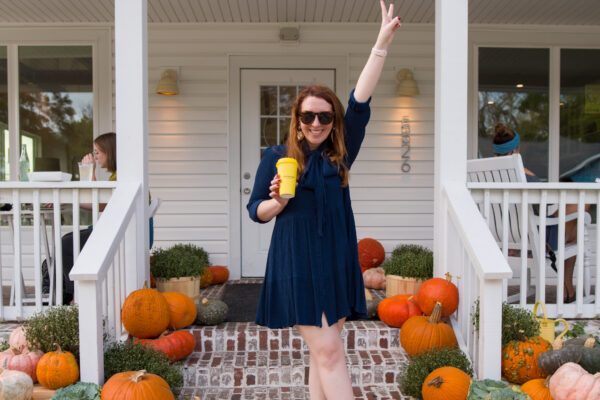 a list of my favorite coffee spots in dallas... by a local!
Read the Post
Glitter & Spice is part of several affiliate advertising programs, including rewardStyle and ShopStyle Collective. This means that if you click and/or make a purchase through certain links on this site or any related social media platforms, I may make a commission from that click and/or purchase. All opinions are my own. Thank you for your support and for making Glitter & Spice possible.
rewardStyle privacy policy
ShopStyle Collective privacy policy
Copyright 2022
Theme by