How to Spend a Week in Madrid: My Madrid Travel Guide I know, I know: I should’ve had my Madrid Travel Guide up like a month ago. But there were so many details that needed to be included… And this week is the first free time I’ve had the time to sit down and just crank it out all in one sitting.

Back in March, I traveled with one of my best friends from the MBA program to Barcelona and Madrid for our spring break. I had been to both cities with my mother over a decade ago, and I couldn’t wait to get back and see how my memories held up.

They did: my friend and I had the most absolutely magical time on our trip.

In case you missed it, I wrote about our trip to Barcelona here (every single detail!). However, the fact that I hadn’t yet written my Madrid travel guide has been eating at me for forever. And by “forever”, I mean about a month.

But now that problem is solved, so let’s dive in!

As one of the biggest cities in Europe, Madrid is pretty easy to get to. There are dozens of flights from the U.S. to Madrid-Barajas International Airport per day. In fact, we caught a direct flight back from Madrid to Dallas (and we all love direct flights!).

The Madrid Atocha train station is also well-located. It has tons of trains coming and going from just about every other major city in Europe. If you’re stopping in Madrid as a part of a larger tour around Spain, I highly recommend taking a train. European trains are such an easy form of transportation.

Finally, Madrid does have Uber, so don’t fret about having to deal with directing taxis in Spanish. Especially if your Spanish is as polished as mine is… AKA not at all. – Where to Stay in Madrid –

Disclaimer: that photo above that kind of looks like a freaking palace is not where I stayed while in Madrid. That’s legitimately a palace. It’s the Palacio Real (scroll to the bottom of this post for more information). Just thought y’all should know.

While in Madrid, we stayed at The Westin Palace (its a Starwood property). Though the rooms were small, the hotel was absolutely lovely and super well-located. And I really do mean super well-located. It was mere steps from the Museo del Prado and a short walk (less than 20 minutes) to Parque del Retiro, Palacio Real, and the Plaza Mayor. I enjoyed the hotel and its location so much that I would definitely consider staying at The Westin Palace again the next time I go to Madrid.

Other hotels we considered (all in the same area) were: – Where to Eat in Madrid: Madrid Restaurants Travel Guide –

A few things you should know about eating in Madrid:

One – dinners are late. We had a 10:30PM seating when we went to Botín and we weren’t even close to the last people being seated.

Two – meals are leisurely. Lunches took a minimum of two hours and we had more than one dinner that lasted upwards of four hours. And that’s totally normal.

As one of the major European cities (and the capital of Spain), Madrid has just about every type of cuisine imaginable. However, it’s not as much of a foodie destination as Barcelona is and I will say that, overall, the food in Madrid wasn’t as good as the food in Barcelona. In Barcelona, we had some great meals. In Madrid, we had a lot of good meals.

This was by far our best meal in Madrid. This restaurant is right next to Retiro Park (and near the posh shopping districts!) and it was a recommendation from one of my friends from college. We stopped in at El Perro y La Galleta for lunch on our first day in Madrid. At this point in our trip, my travel companion (Taylor) was really missing American foods… so we got burgers, fries, a smattering of their offered appetizers, and two bottles of rosé. And everything was delicious.

On top of the awesome food, the interiors in this restaurant are totally Instagram-worthy. They have tons of paintings of dressed-up dogs wearing bowties and hats and such, as well as a cute library feel as you wander through the restaurant. Definitely my top recommendation if you go to Madrid!

I was at a loss as to whether to put this under “Where to Eat” or “What to Do”… but, as Mercado de San Miguel is a food market with tons of stalls (kind of like the Boquería in Barcelona… but with more of a dine-in, prepared foods focus), I thought it appropriate to place it under “Where to Eat”.

When we popped in, we did drinks and tapas before going back to the hotel for a super-late siesta. The market has stalls serving everything from sushi and paella to pizza and macaroons, so there’s definitely something for every type of palette. Honestly, this was one of my favorite activities / meals from our trip – it had to be included in my Madrid Travel Guide!

We actually wandered in here just to pass the time during a brief rain on our last day in Spain. It was right around the corner from our hotel and Taylor needed breakfast or she would start getting hangry… so when the rain started as we were right outside, we decided it was fate and hopped in.

La Rollerie has very trendy interiors and is definitely an excellent brunch spot. Taylor had their “American Breakfast”, whereas I went for the Royale eggs benedict with salmon. Mimosas all around. Both of us really enjoyed our meals… and I particularly loved the fact that coffee was complimentary (brunch spots take note: complimentary coffee should be a must!).

Okay. This was touristy. But no Madrid Travel Guide would be complete without mention of Chocolate con Churros… And Chocolatería San Ginés has been serving Madrid’s famous breakfast since the 1890s! Oh, and they’re damn good at it too!

Pro tip: go closer to 11am to beat the morning tourist rush so you don’t have to wait in line.

I actually went to Botín 11 years ago when my mom and I went to Madrid. I’m fairly certain that the menu hasn’t changed. The food was good, the bread was great… and their stock of affordable wines listed on their wine list is both bitchin’ and extensive. 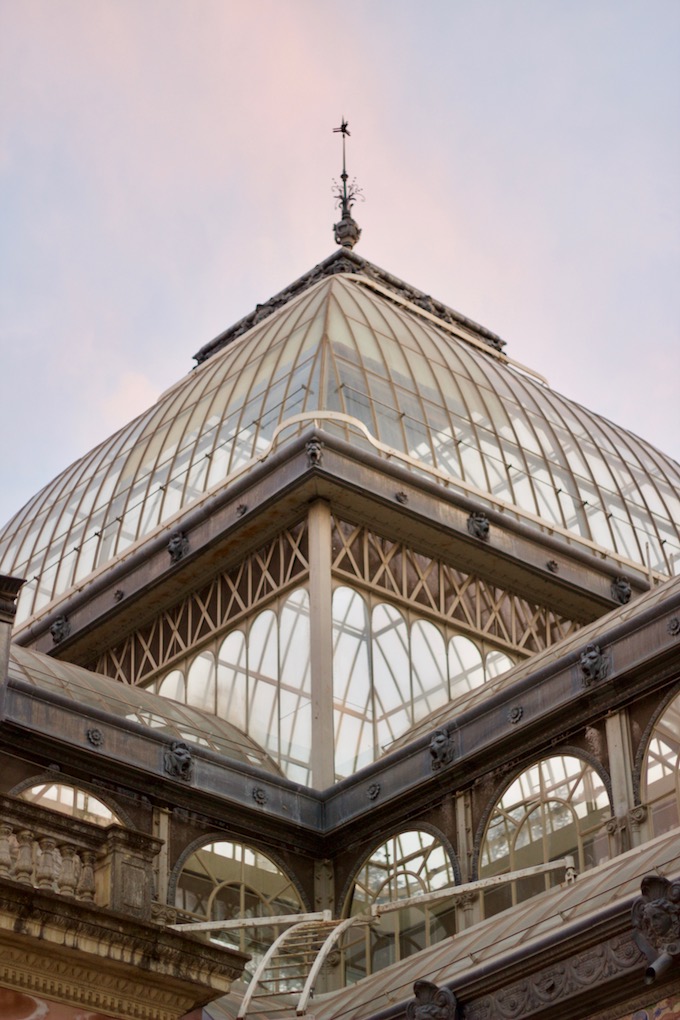 – What to Do in Madrid: Madrid Activities Travel Guide –

I definitely recommend taking a day to wander the halls of El Prado. There are so many beautiful pieces that you don’t want to miss seeing!

The Parque del Retiro (aka Buen Retiro Park) is a large public park in the center of the city. It’s walking distance from the Museo del Prado (and across the street from El Perro y La Galleta in case you want to go for a walk after eating!).

The park has a few sights you absolutely cannot miss… and my favorites are the Monument to Alfonso XII (you can’t miss it!), the Paseo de la Argentina, and the Crystal Palace. The Crystal Palace was unfortunately closed for maintenance while we were in Madrid, but I cannot imagine anything better than watching the sunset from inside the palace… watching the light reflect off of the glass and rainbows cascade around you!

The Palacio Real is the official residence of the Spanish Royal Family (yes, they do still have a monarchy… and Queen Letizia is just as fabulously dressed as the Duchess of Cambridge, and the King and Queen’s daughters are freaking adorable). You need to buy a ticket to tour the Palacio Real, and the tickets are all under 11€ (currently about $12). But, once you buy a ticket, you can spend as much time as you wish on the grounds.

Taylor and I did the entire palace and its grounds in a little under two hours. We toured all of the rooms (fully furnished) as well as the armory, the collection of carriages, and the grounds.

The Plaza de Oriente is right in front of the Palacio Real – in my humble opinion, it’s probably the most beautifully designed plaza in Madrid. So it’s definitely one not to miss!

One of the biggest tourist attractions in Madrid, the Plaza Mayor is the historical center of commerce in Madrid. Nowadays, instead of having tons of stalls of merchants selling their goods and wares, there are tourist shops and tons of restaurants of entirely “meh” quality.

And “entertainers” wearing a lot of weird costumes in exchange for money.

Because of its historical significance (and the fact that it’s the biggest plaza in Madrid), the Plaza Mayor is definitely something to see… but, after taking the required photos, I highly recommend going elsewhere as quickly as possible.

A slightly-less-touristy plaza with much better options in terms of food and entertainment. The Plaza Santa Ana is much more of a cultural center of Madrid now than the Plaza Mayor.

The plaza is also super close to Teatro Español… so, if you have plans to go to the theater while in Madrid, I cannot imagine a better evening than one including drinks and tapas in Plaza Santa Ana before crossing the plaza to see a production.

Spain
2 Comments
Share
Glitter & Spice is part of several affiliate advertising programs, including rewardStyle and ShopStyle Collective. This means that if you click and/or make a purchase through certain links on this site or any related social media platforms, I may make a commission from that click and/or purchase. All opinions are my own. Thank you for your support and for making Glitter & Spice possible.
rewardStyle privacy policy
ShopStyle Collective privacy policy
Copyright 2023
Theme by